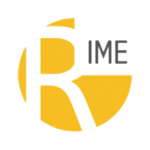 Limitations and points of vigilance

The above developments highlight the innovative nature of peer support in the approach used and the tools deployed in the social professions. It should be stressed that this practice has been subject to certain limitations.

✅The first limitation that has been addressed to peer support concerns the very principle and tools of this practice. “Is all experience experiential knowledge? This is a question posed by the authors of the Interministerial Delegation for Housing and Access to Housing. In this report, the Delegation poses the idea that all experience is not knowledge, in other words, to know, to live is not to know.

✅The second limitation is the targeting between a skill of the peer helpers and the needs of the organisation: not every skill is useful. For example, knowing how to speak several African dialects is a skill, but without mastering French this skill is useless.

One of the key success factors of peer support is its capacity to rely on the “experience of peers” while professionalising it, i.e. proposing a co-constructed space and a collaborative ecosystem that allows for its increase in capacity (number of people treated) and the increase in competence of the peer support worker. The professionals who collaborate with the peer helper are first of all co-elaborators of the contents of his or her position by targeting the experiential knowledge useful to the institution and which can be metamorphosed into a salaried peer helper position.

It is therefore essential that the professionals, co-workers in peer support and collaborators of the peer helper, play their role of “targeting useful skills” and, conversely, of targeting those that are not.

The most important work therefore consists of :

✅Targeting skills that meet a need;

✅The development of integration-accompaniment procedures for a peer helper;

✅Work on the content of the peer helper job descriptions

This initial “discernment” and “targeting” work is fundamental to the development of the peer helper’s workstation; in other words, the success and benefits of peer support lie in

⭐️Ensure that peers (co-developers) are able to identify core experiences to build on and relegate those that are not usable or relevant to the context in which they operate.

⭐️Assess the “danger of resorting to a simple compilation of facts”, where experiential knowledge is only factual experience and not “didactic” experience.

⭐️Ensuring that peer helpers have the capacity to distance themselves, which is not something they can take for granted. Their life course did not always allow for the right distance or how to generate from a life experience the “pedagogical” or learning capacity.

Still on the points of risks incurred during the implementation of peer support in our two structures, the “politics of change” is a risk for some companies that significantly change their work organisation or governance. The change brought about by peer support in the two CADAs as a positive dynamic has also shown the friction within the teams of employees and volunteers faced with the unknown. The social workers referring to the peer helper sometimes had difficulty adapting to the joint practice of “power” with their new colleagues.

Framing the policy of change by involving all stakeholders through co-construction and innovation by all;

⭐️Evolving with reality and the field;

⭐️Managing the risk of failure of a new approach that could be stifled if it remains in a vacuum within the structure;

⭐️Ensure protocols and open learning bases from the initial training of social and medical-social practitioners as well as peer helpers.

From this point of view, all these risks presented upstream or during the recruitment of peer helpers and their professionalisation process could have been an obstacle to the development of this action. Let us add the intercultural dimension between employees and peer helpers which could have added to this listing and which could have impacted on the benefit-risk ratio.

These risks and limits of the ethical or intercultural framework in management are mainly linked to the requirements of neutrality, non-judgement and even benevolence among the hybrid teams of employees, volunteers, peers and helpers. We propose to focus on this ethical framework and its requirements, which have guaranteed the success of the action.

The relationship and interactions with the public require that the confidentiality of exchanges be guaranteed. On the one hand, this confidentiality contributes to the quality of the relationship since it feeds the development of a relationship of trust between the parties. This trust is the keystone of the peer support system. On the other hand, it should be remembered that peer helpers intervene in structures that are required to respect professional secrecy. This requirement has significant legal implications in the event of malfunctioning. The confidentiality of exchanges thus involves human and managerial issues. It must therefore be an integral part of the training of peer helpers.

The question of status was discussed at a round table held in Brussels in 2018, bringing together several organisations working in the social field. It emerged that definitional ambiguity leads to the creation of plural realities. Training could be a dividing line between peer helpers and other stakeholders such as experience experts (Belgian context). But is this distinction based on training well founded? To avoid ambiguous situations, formalisation is put forward as a tool for structuring the framework of action. However, it should be emphasised that it acts as a guiding and potentially disqualifying tool. When a higher authority indicates what the peer helper’s remit is, there is already an external intervention that potentially conflicts with the principle of peer support. Furthermore, the directions and prerequisites announced also contribute to disqualify some candidates who do not consider themselves qualified for the position. In addition, the report of the Délégation interministérielle à l’hébergement et à l’accès au logement (interministerial delegation for housing and access to housing) highlights the risks of tension and potential conflict between employees and peer helpers.

The peer helper may indeed sometimes occupy a particular position at the interface between the public and the teams. This position is potentially subject to instrumentalisation on both sides to impose uncoordinated choices. This intermediary position also highlights the questions of loyalty that may exist (for example, in the field of professional secrecy, the monitoring of certain medical treatments, etc.).

Indeed, it is noted that: “More problematically, this approach could lead to training by traditional professionals who would train peer helpers, thereby erasing the singularity of the expertise of their experience and the relationships they establish with their peers. This industrial and political approach can contribute to turning peer helpers into “moles”, breaking trust and calling into question the aims pursued. If we push the reasoning to the extreme, it could be that the intensive institutionalisation of peer support and the development of the status of peer carer could lead to the risk of making it compulsory for any person with difficulties in his or her life to engage in peer support. However, the involvement of peer helpers should not be seen as a way of “doing good”, or responding to a fashion effect only to be discarded once this effect has passed. We have shown in previous developments that peer support must necessarily be part of a network of projects: an organisational project aimed at sustaining and developing this practice, but also life projects. On a more general level, other criticisms have been levelled at peer support in the social and health fields (Charlier and Sandron). These professions can then be seen:

as new professions but part of the casualisation of the world of social work;

as a workforce of under-experienced, underpaid people/professionals;

as an aggravated component of social work.

Chalier and Sandron (2018) then give us the different forms of precarisation to which these peer helpers are subjected:

The two authors conclude their discussion by insisting on the potential effects of complementarity between actors, which would be more beneficial than putting them in competition.

To enable real added value in intervention practices, teams must recognise the meaning of peer support and be trained in concepts such as recovery and empowerment, as well as the effective implementation of this type of practice. It is also essential to provide information on the absence of competition between the peer helper and the team, to highlight the complementary approach.

This seems to be easier in teams that already have a horizontal approach to intervention. Once the peer helper is part of the team, the opening up of spaces for intervision and supervision, but also for the co-construction of knowledge and the function, allows for greater fluidity of action. The framework of work in the context can evolve and be rethought during the course of the intervention and, above all, co-constructed with the whole team.

The implementation of a new practice such as peer support within a professional ecosystem such as CADA is not self-evident. It required questioning, changes in knowledge, know-how and communication skills to ensure its success.

The points of vigilance that we noted during our own experimentation: 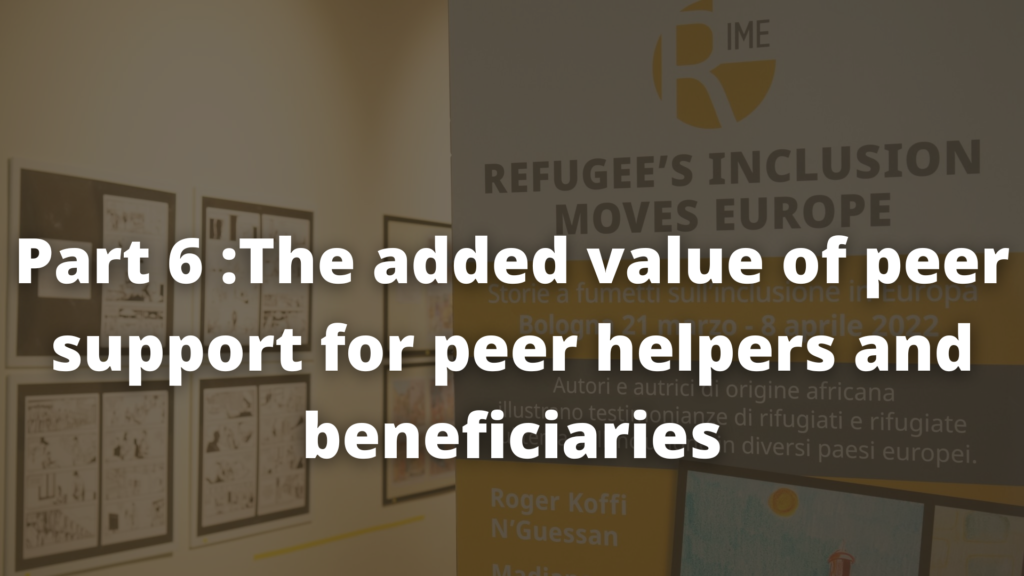 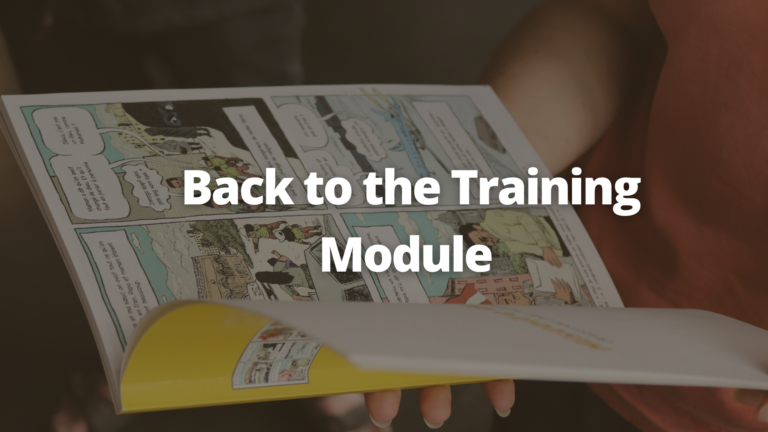 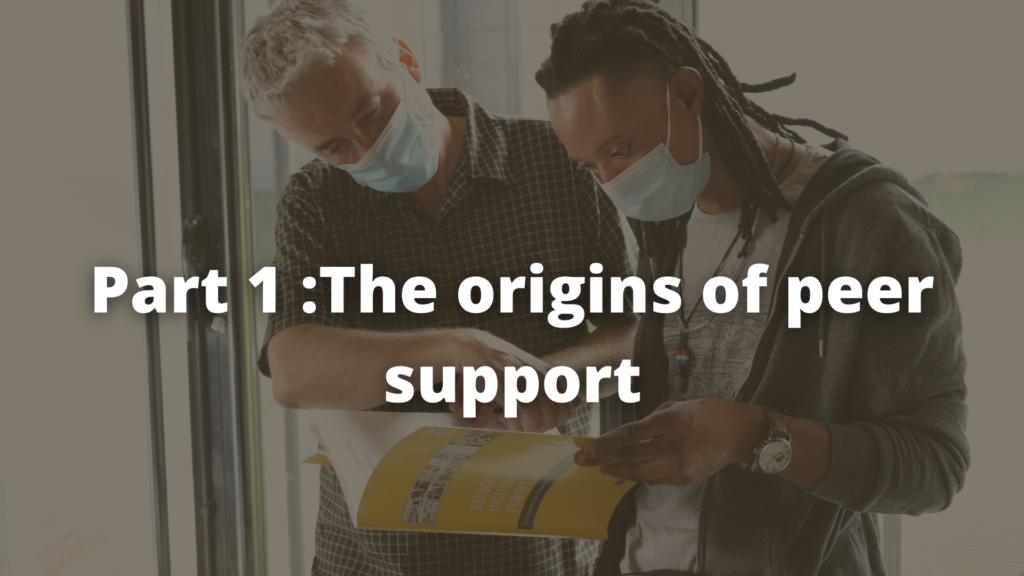